Catalonia Independence: Spain Will Lose 6.3% of Territory and 20% of GDP

Home » World Politics » Catalonia Independence: Spain Will Lose 6.3% of Territory and 20% of GDP

Catalonia is one of the richest, if not the richest, regions in Spain. Catalonia wants to separate from Spain, and it recently held a referendum to this effect. As with many independence movements, geography can explain some of the motivations for aspirations of sovereignty.

Looking at the Catalonia vs. Spain map, however, doesn’t help in the present case. Catalonia is the northeastern-most region of Spain. It’s about 6.3% of Spain’s territory and is characterized by being on the Mediterranean Sea, but so is much of the rest of Spain.

Barcelona, which is Catalonia’s largest city, is less than 380 miles from Spain’s capital city, Madrid. That’s about the distance between San Francisco and Los Angeles. 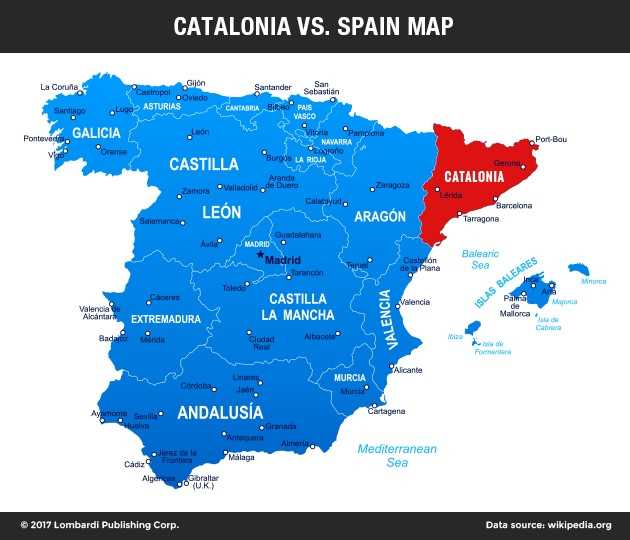 What the Catalonia vs. Spain map does not show are the strong cultural identity and language that have helped shape Catalonia. Culture and language have established non-geographic borders, as it were, that have given birth to symbols of a veritable Catalan culture. Perhaps you may have heard of artists such as Salvador Dalí, Joan Miró, or Antoni Gaudí. They have contributed to the rise of a Catalan culture.

The Catalan government claims that 5.3 million people had a right to vote in the Catalan referendum. But the total population of Catalonia is 7.5 million, which accounts for some 16% of Spain’s population (about 46 million).

The Catalan regional government promptly published the Catalan referendum results. Some 2.2 million people took part in the vote, with allegedly 90% of them voting in favor of independence. But the voter turnout, notwithstanding logistical difficulties due to the rioting, was about 42% of the electorate. (Source: “Catalonia referendum: Spanish court suspends Catalan parliament in wake of independence vote,” The Independent, October 5, 2017.)

But, so far, given that the Spanish government has declared the referendum illegal, the main results of the Catalan referendum, for now, are the suspension of the Catalan government and mounting tensions between its president, Carles Puigdemont and Spain’s prime minister, Mariano Rajoy Brey. Moreover, King Felipe VI delivered a statement that the Catalans have considered especially contentious in the wake of the October 1 vote.

Spain Civil War 2017? Catalonia on the Brink of Independence

Very rarely has King Felipe addressed the Spanish people as he did on October 3. He declared that the state had to ensure the constitutional order in Catalonia, whose leaders have illegally proclaimed independence. One of the unintended results of the Catalan referendum could be further division. The Catalans will interpret King Felipe as overstretching the his constitutional authority. Meanwhile, the core of Spain will rally around the monarchy. 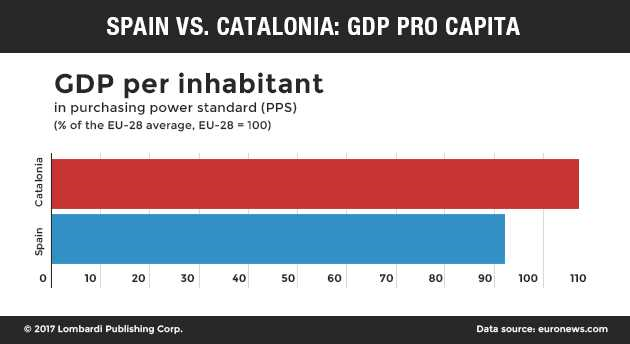 But the effects of the 2008 financial crisis have contributed to exacerbating many Catalans’ sensation of being fiscally overburdened. Catalonia is a net contributor of taxes to the central state in Madrid. Thus, it pays more to support the poorer regions than it gets back in terms of its economic output. Still, a quarter of Spanish exports come from this economically strong northeastern Spanish region. Spain, therefore, has a lot to lose, should Catalonia succeed in breaking away.

Catalonia is, so to speak, the California (or perhaps the Connecticut or Massachusetts) of Spain. Many Catalans, on the other hand, feel they are not doing as well as the economic statistics suggest. They compare themselves to other Europeans (Germans and French, for example) rather than to their poorer fellow Spaniards. Thus, they don’t get the sense that they are living in a thriving region.

The Catalans, therefore, have a highly economic or pecuniary motive for separating from Spain. There are no big ideals of democracy or freedom here. This makes the rest of Spain feel even more resentful. Catalonia wants to break from Spain and profit from its own economic strength. The government in Madrid wants to prevent this at all costs.

As for Catalonia itself, it certainly has all the prerequisites to make it as an economically prosperous state within the European Union (EU). Its economy is large enough to survive. But it would have to re-apply to the EU, and even to the United Nations (UN). In both cases, given that this is not going to be an easy divorce, expect Spain to object profusely to the EU allowing Catalonia to join.

If it was left out of the EU, Catalonia might lose many of its current trade and tourism advantages with the other member states.

The Catalans’ complaints, meanwhile, are like those of all other inhabitants of the West. Whether they live in the United States, Europe, or even Japan, many would agree that wages and salaries have been stagnating for years. Inflation is rising. Consumers perceive it as they buy food and groceries. But governments can’t seem to find it.

Spain, in particular, has suffered considerably. It has thus lost most of its purchasing power compared to the rest of Europe. The Catalans see independence as the card they can play to improve their situation.

For several years, Catalonia has demanded greater autonomy from Spain. Apart from the obvious economic motivations, Catalans claim historical and social reasons. Catalonia was absorbed into the Kingdom of Aragon as early as the 11th century, becoming part of Spain in the 15th century. Thus, Catalonia is as much a part of Spain as any other major region. But the 19th century saw the Catalans reviving—or creating—Catalan nationalism.

The Civil War in the United States often explains some of the present misunderstandings over flags and generals that arise from time to time between the American North and South. So it is in Spain. Indeed, nationalism in Catalonia today owes much to this region’s role during the Spanish Civil War and the advent of the Spanish Republic in 1931. The origins of the present Catalonia independence declaration, therefore, must be sought in that period.

In the Spanish Republic, the “Generalitat of Catalonia,” covering more or less the present map of Catalonia, received a high degree of autonomy. It eventually became a bastion of opposition to the authoritarian regime of the”Caudillo” (the equivalent of “Fuhrer” or “Duce”) Francisco Franco regime during the Spanish Civil War. Unfortunately for the Catalans and the Republicans, Catalonia lost all its privileges during the Franco dictatorship, which lasted from 1939 to 1975.

The background of Catalonia’s independence explained in very crude terms, might focus on two key elements of Franco’s national vision for Spain. Franco encouraged bullfighting and flamenco dancing as Spain’s cultural symbols. Neither one, as it happens, applies to Catalonia.

After Franco died, King Juan Carlos launched the democratic Constitution of 1978, which granted Catalonia a high degree of autonomy.

Catalonia has its own police, the Mossos d’Esquadra. The Catalan language, which was forbidden during Francoism, was given full restoration as the official language of Catalonia, along with Spanish. Anyone who has studied Spanish but finds the signs in Barcelona confusing might be forgiven. That’s because the language is often Catalan, not Castellano Spanish, the language spoken in Madrid.

In 2012, the Catalan parliament passed a resolution calling for a referendum on the self-determination of Catalonia. A referendum was first called on November 9, 2014, but the courts managed to stop it, suspending the Catalan parliament’s law that called for it. There was an informal referendum, similar in scope to the one just held on October 1, but it was less binding. The consultation had no legal value, having been declared unconstitutional.

The Spanish Constitutional Court suspended this law on September 7. The day after, the Superior Court of Justice of Catalonia ordered the various security forces operating in the region, including the local Mossos, to seize referendum materials.

At first glance, the stats suggest that Catalonia could easily thrive independently of Spain. But the Catalonia independence effects might be worse than many separatists can imagine. Yes, in theory, Catalonia would become the 12th richest country in Europe. (Source” “Chi e come prevede effetti nefasti per la Catalogna dopo il referendum per l’indipendenza,” Formiche, September 27, 2017.)

But, such an argument is equivalent to the one that holds that California would be the world’s seventh-biggest power of the world. Yet, despite the “trauma” of Trump’s election, Californians have not opted out of the United States. It all comes down to costs. And, simply out, independence would cost Californians (and Catalans) dearly.

Spain’s economic minister, Luis de Guindos, considers that Catalonia’s secession could have a negative impact in economic terms. He calls it “economic and financial suicide” for Catalonia. (Source: “Drop separatism calls and we can talk money, Madrid tells Catalans,” The Financial Times, September 21, 2017.).

Like the U.K. with its Brexit, Catalonia would also have to confront the fact that independence would imply being left out of all Spanish international treaties and deals. Catalonia’s currency would not be the euro, and it would be valued less.

The president of the American Chamber of Commerce in Spain, Jaime Malet, said that independent Catalonia would lose many American investments and businesses. These include HP Inc, General Electric Company, Pfizer Inc., The Coca-Cola Co, Cisco Systems, Inc., and Dow Chemical Co.

Simply, these companies and others would move to different parts of Spain. Then there’s the issue of Catalan debt. As rich as Catalonia is, it also owes one of the biggest debts to Madrid—estimated at 115% of Catalonia’s GDP. (Source: Formiche, op cit.)