Blockchain Technology Explained and How It Could Be the Next “Internet”

How Does the Blockchain Work?

Blockchain is a decentralized data structure; it serves as the building block for digital currencies. For example, the famous Bitcoin relies on blockchain technology. But, how does the blockchain work, you ask? To avoid complications, put on your “accounting” hat because blockchain simply works as a ledger.

Blockchain is an open-ended digital ledger for all transactions related to a given set of data. By open-ended, it means that the information—the transactions—are not stored on a central computer. Rather, it gets stored and constantly updated on many different computers, which act as the so-called “nodes.”

The decentralized nature of the blockchain technology ensures that a blockchain does not need to be managed by any central authority. If it’s still not clear, think of the blockchain as a sequence, a chain if you will, of blocks, each containing details of a certain transaction. Let’s pretend that a transaction involves the exchange of money.

The chain refers to every detail about that exchange of money. The transactions are grouped into blocks, checked for validity, and attached to the previous chain of blocks. In the financial sector, which is leading the development of the technology for now, the technical term for blockchain is “distributed ledger technology” (DLT). This technology is distinguished by its decentralization, invariability, and transparency.

Also Read: “Blockchain’s Impact on the Financial Sector Is Just the Beginning” 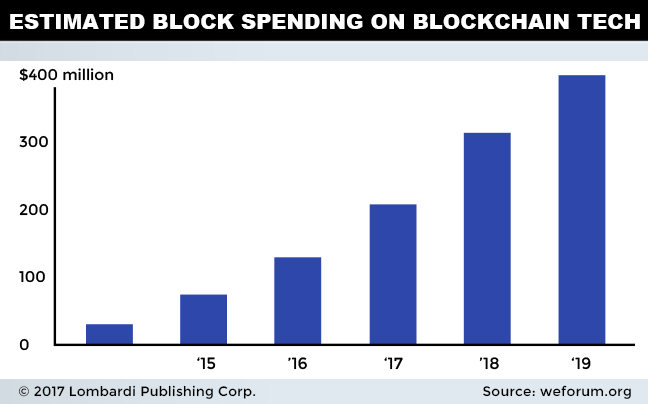 Investment in blockchain is rising quickly. Blockchain, as mentioned earlier, has really made its name on the world scene through its most famous offshoot: Bitcoin. Blockchain, thanks to its decentralized structure, allows people to act as “their own bank.” That’s a frequent comment one hears from blockchain groupies.

You may wonder, why on earth would anyone want to be their own bank? To understand, it helps to observe that many blockchain and Bitcoin fans are also political idealists, or even anarchists of sorts. These are the kinds of people you may have as friends on social media. They have a problem with the traditional banking system.

The problem is that banks—like other large organizations, the government included—control too many assets. They have too much property. In the eyes of many, this makes banks “evil” or untrustworthy. Thus, blockchain advocates prefer to entrust their savings to a system that is better able to protect them.

Blockchain is intimately tied to the concept of cryptography (more on that below). Thus, blockchain is perceived to better withstand cyberattacks and prevent unauthorized eyes prying into personal details. This is a good point to launch a more existential argument into what blockchain technology really is.

What Is Blockchain Technology?

Picking up on anarchists who don’t trust the governments of big institutions with lots of power like banks, blockchain is a technology whose appeal lies beyond such limits. That is, it has roots beyond the traditional boundaries of science and technology, and its appeal is not unlike that of a political ideology or religious movement. Yes, taken to extremes, blockchain has definite cult potential.

Blockchain is the technological answer to questions such as the following: what if the bureaucracy could be smashed? What if the problem of identity theft would simply go away? What if we could all decide where our energy comes from and what generates it? Those are just a few examples but, as you may have gathered, the questions are many, and they are not shy of dwelling into esoterica.

These are all issues relevant to our current society, and blockchain—say its fans and proponents—is the tool with the potential to provide solutions. Thus, blockchain technology is not simply a database network that leverages peer-to-peer  (P2P) technology. But, so far, none of those great things that blockchain might achieve have happened. Indeed, so far, blockchain technology is best explained as an accounting book in which all Bitcoin transactions have been recorded since 2009.

How Would Blockchain Technology Impact Business?

Still, Blockchain technology has started to draw attention. Perhaps it’s not moving where its fans want yet, but the first signs should be encouraging. Blockchain might play a crucial role in advancing the Internet of Things (IoT).

The IoT is the next major digital revolution after the Internet. Through it, objects (that is the “things”) become intelligent, in the sense that they will be able to communicate data about themselves and access information that others have amassed.

A most useful example might be an alarm clock that, thanks to connections to traffic information, will automatically adjust the time it goes off. Thus, you won’t be late for the big date—or more likely, for work. The IoT will also be able to inform consumers about the state of the food in their fridge: is it still safe to eat? You’ll find out without having to rely on the traditional trial and error system and related bathroom visits.

So, make no mistake, blockchain could be a word as ubiquitous as “Internet” or “social media” in less than a decade. The World Economic Forum (WEF) expects blockchain to be at the heart of an industry accounting for some 10% of world GDP by 2025. (Source: “Deep Shift Technology Tipping Points and Societal Impact,” World Economic Forum, last accessed April 28, 2017.)

The WEF has identified blockchain technology as one of the seven highest-potential technologies that will drastically change our world. This is especially due to the high security that this technology can offer. That’s why this technology has attracted so much interest from the banking world.

What Is Blockchain Banking?

The short answer is that blockchain banking might simply become what everyone will call banking in a few years’ time. The first thing there is to know about blockchain banking is that it could save banks some 30% of their operational costs. When a tool or system allows you to become that much more profitable, you’re going to get people’s attention; especially if they’re bankers.

An Accenture Plc (NYSE:ACN) report has shown that Blockchain technology could cut 30%, on average, of the infrastructure costs of 80% of the 10 largest investment banks, enabling them to save anywhere from $8.0–$12.0 billion. The report has considered the impact of granular data on the costs of eight banks. (Source: “Banking on Blockchain: A Value Analysis for Investment Banks,” Accenture Plc, last accessed April 28, 2017.)

Blockchain in banking can be used to ensure the proper exchange of securities and shares. It can eliminate the need for notarization or it could cut compliance, reporting, and operations costs. All this is possible because each transaction is monitored by a network of nodes that guarantees its fairness, and can maintain its anonymity.

When Was Blockchain Introduced?

Blockchain, like all technology, results from a combination of revolution and evolution. But, if we want to be specific, blockchain enters the vernacular alongside Bitcoin and cryptography in 2008. On October 31, 2008, a mysterious person—who goes by the name Satoshi Nakamoto—published the first Bitcoin documents, a white paper, explaining how this new digital currency works. (Source: “Bitcoin: A Peer to Peer Electronic Cash System,” Bitcoin, October 31, 2008.)

The technology behind the Bitcoin, as Nakamoto’s white paper explains, binds the P2P network (users interacting directly with each other, without third parties) with asymmetric cryptography. This is the essence of Blockchain technology. It allows anyone to send a message like, for example, “Billy Bob here, I want to send Mary 10 bitcoins.” This message spreads in P2P to all members of a community of users, who verify the validity of the message.

By validity, it means a verification of Billy Bob’s actual ability to send Mary 10 bitcoins. Thus, the community will verify first that Bob has 10 bitcoins to send. Then it will ensure he’s sending them only to the lucky Mary, rather than to someone else.

A consensus is established: everyone agrees that Billy Bob is indeed the rich magnate sending the 10 bitcoins and that the request was made once. When all those parameters are verified, the transaction is made and is stored in a ledger that all can see. That is blockchain technology explained.

In short, it’s a secure and unbreakable protocol. Blockchain technology applications have expanded since 2008, and they are destined to grow exponentially. Blockchain started as the backbone for Bitcoin, but it can spread to all kinds of other digital currencies. It is, in the end, an open-ended general ledger of all transactions.

But why stop there? The blockchain tech applications go far beyond the function of a financial transaction book. For example, that same rapid and secure verification system can apply to contracts. Or, a blockchain could handle a variety of management and process applications. Sensitive data, like health records or university student performance records could be organized and controlled via a blockchain.

Accordingly, many countries and companies are researching this technology. The primary concerns are security, transparency, and efficiency. The possibility to automate processes via a secure infrastructure with minimal risk of data manipulation will attract many institutions, not just banks.

Naturally, blockchain will be one of the technologies of greatest interest to investors. Blockchain technology stocks are still in their infancy. Blockchain is a technology, but it’s like the Internet. In other words, no single company is producing the technology. Rather, blockchain, is a way of organizing software and hardware to develop and improve other processes.

Thus, if you’re wondering how to invest in blockchain technology, the answer is simply to study what certain companies are doing to incorporate blockchain in their systems. The financial industry is a good way to start, particularly credit card providers. Visa Inc (NYSE:V) and Mastercard Inc (NYSE:MA), to mention a few, would certainly benefit from blockchain systems.

There are some specific blockchain technology companies, but they are developing specific aspects of the technology. It’s unclear which have value, as many have started out as penny stocks. They might develop patents that become desirable. Perhaps, in time, one of them might emerge as the Google of Blockchain. But it’s too early to tell who has that potential.

Still, the more you learn about blockchain, the better the chance of identifying the aspects of blockchain that will become universal.