Now more than ever, it’s important that investors pay attention to what’s happening in the interest rate market. There are seismic events happening, and they could create a significant amount of volatility in the financial markets, if not an outright financial and retirement crisis.

Fast-forward to 2021. The bond market began to disagree with the narrative that interest rates would remain low for a long time. The yields on bonds started to spike higher, essentially saying that investors expected interest rates to go higher.

Over the past year, there has been significant damage in the bond market, specifically in the short-term interest rate market. For some perspective, look at the below chart; it plots the yields on three-month U.S. Treasury bonds, also called “T-bills.” 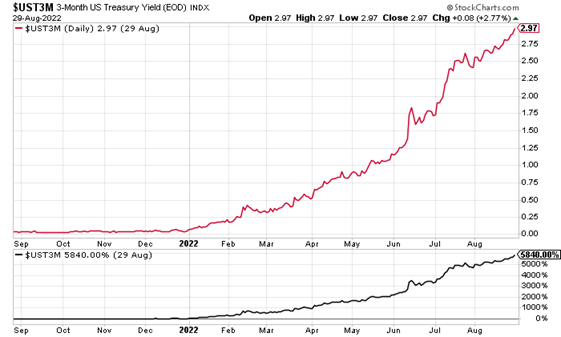 One could certainly argue that this happened because the Federal Reserve started to increase its benchmark interest rates. Surely, that’s one reason why the yield on three-month U.S. Treasury bonds soared. What’s vital to note is that the increase happened in such a short period.

Over the past 40 years, we haven’t seen anything like this. Yes, the yield on three-month U.S. Treasury bonds has been higher, but the recent percentage change and the speed of the increase are unprecedented. One has to wonder whether this is a sort of black swan event.

Furthermore, if you look at other shorter-term bonds, you’ll see that their yields have surged by a lot as well. Regardless, the three-month Treasury bond is something really worth highlighting.

Why bother looking into all this?

The financial system has become extremely complex over the years. Businesses and financial institutions try to protect themselves from interest rate shocks by buying derivatives. The idea behind derivatives is that they can bring some stability to revenues, generate higher incomes, and so on.

But don’t forget: the current moves in the interest rate market weren’t foreseen by many. One could even argue whether they were anticipated by the Federal Reserve. So, this opens up room for mistakes.

As of the first quarter of 2022, U.S. banks had derivatives with a notional worth of $145.9 trillion. (Source: “Quarterly Report on Bank Trading and Derivatives Activities: First Quarter 2022,” Office of the Comptroller of the Currency, last accessed August 30, 2022.)

You also shouldn’t forget that derivatives involve two parties. With this, could there be financial institutions and businesses on the wrong side of interest rates? Even if we assume just five percent of interest rate derivatives are in trouble, it’s still an immense amount of money.

While that’s one aspect, what’s happening in the interest rate market could also have a negative impact on the retirements of many Americans. Consider pension funds; they hold many bonds. Why? Bonds bring consistency and safety to investment portfolios, compared to other types of assets, including stocks.

Look at the chart below; it plots the market value of U.S. Treasury bonds held by pension funds.

Here’s How This Could Turn Into a Retirement Crisis

Pension funds held close to $3.5 trillion worth of U.S. Treasury bonds at the end of the first quarter of 2022. Over the past few months, the prices of U.S. bonds have come down. So, all of a sudden, pension funds could have much lower asset values than they had at the beginning of the year. Plus, the bonds they bought earlier paid almost nothing. This could lead them to adjust their portfolios.

If pension funds panic-sell, they’ll take losses, and this will have direct impacts on the retirements of Americans.

Dear reader, the next few quarters are going to be critical. Investors need to be careful and watch their portfolios closely. Significant losses could be around the corner. Moreover, if there’s a panic in the bond market, it will hit the stock market very quickly.