Bitcoin vs. Gold: Which Should You Own in a Financial Collapse?

Home » Commodities » Bitcoin vs. Gold: Which Should You Own in a Financial Collapse?

Bitcoin vs. gold: this is becoming quite the conversation piece between believers of both financial assets. As little as a couple years ago, few people considered Bitcoin a safe-haven asset in the same vein as gold. Gold is still the undisputed king in many people’s eyes, but as more time rolls along, more and more people are becoming Bitcoin believers. Now, some are openly wondering whether Bitcoin is the new, modern-day version of gold.

Perhaps one of the biggest comparison points between Bitcoin vs. gold has to do with their shared characteristics as money. From a cursory thought, they don’t seem to share much in common. But a closer look reveals striking similarities for their optimal monetary qualities.

Like gold, Bitcoin is scarce—except even more so. There are only about 16 million bitcoins electronically mined in supply currently, and this number will never go beyond 21 million (expected sometime circa 2040). Bitcoin founder Satoshi Nakamoto set up a monetary policy designed around scarcity to avoid the pitfalls seen in present-day fiat monetary systems around the world.

Bitcoin is also durable like gold, except in a digital sense as opposed to physical sense. Since there is no physical form and all data is kept on a distributed ledger on servers around the globe, Bitcoin will not degrade over time. In fact, Bitcoin (and cryptocurrencies, in general) is immune to fire or theft of physical certificates.

The last imperative similarity between Bitcoin vs. gold shares is their immunity to counterfeit. With today’s technology, sophisticated equipment is able to generate virtually identical paper note facsimiles. Out of necessity, governments have embedded holograms and other forms of counterfeit-proof markers on paper currency. Governments openly acknowledge their desire to go completely cashless in part to the counterfeiting conducted by criminal organizations. Bitcoin and gold are both extremely incorruptible, but for different reasons.

Bitcoin vs. Gold vs. Fiat – The 9 Characteristics That Make Bitcoin Money

And for those unfamiliar with the shared Bitcoin vs. gold similarities, industry insiders are happy to connect the dots. Says co-founder of the BTCC exchange and unofficial Bitcoin spokesperson Bobby Lee, “When the existing money system has problems, people turn to bitcoin sort of like people used to go to gold in the old days.” (Source: “Bitcoin hits a record high, but can it rival gold as a safe haven?,” CNBC, January 4, 2017.)

It’s these types of qualities which have gradually lured investors into the Bitcoin market, many of whom co-invest in gold as an alternative to fiat dollars.

What Is the Bitcoin Market Telling Investors?

In the conversation of Bitcoin vs. gold, invariably, traditionalists will point to gold’s pristine history as a store of value since time immemorial. And there’s absolutely no disputing this fact: gold will forever possess an unmatched, universal appeal as money that no currency can ever match. World civilizations have used gold as currency since roughly 600 B.C. and it continues to be utilized with great zeal today. Gold is also practically guaranteed to not lose much intrinsic value, as it has other applications outside that of a precious metal, and most of the “easy” gold has already been mined.

That being said, as the idea of money evolves, gold is seeing its share of competition. The Chinese, who are among the biggest gold enthusiasts in the world, have been flocking to Bitcoin in droves. By some accounts, transaction volumes on the three largest Chinese Bitcoin trading platforms account for 80% of the world’s total Bitcoin volume. (Source: “China’s Bitcoin trading platforms implement transaction fees,” ECNS, January 25, 2017.)

Since the explosion in transaction volume in 2013, in large part due to Chinese adoption and interest, Bitcoin’s price has soared. In July of 2012, one bitcoin could be had for less than $10.00; just a year and a half later, the Bitcoin gold parity came within a few dollars. Volume elevated from a few thousand bitcoins traded on average, to frequently being in the 7-figures. It was a validation that mainstream demand had arrived.

It was also at the time when Bitcoin experienced its first crash that investors could ascertain whether Bitcoin was a passing fad, or offered lasting value. The investor community was split on whether Bitcoin would recover from the beating it took from its bubble highs. Some thought it would never recover, a classic inverse “V” bubble, similar to the tulip bubble, which never recovered. Others, however, saw a unique technology with immutable currency-like characteristics which had few rivals. The resulting price action would give investors its first clue on the matter.

Bitcoin’s first crash took prices from all-time highs of $1147 in late 2013 to below $200.00 just over a year later. It was quite the fall, but not unprecedented in modern times. Gold had receded in a similar manner back in the early 1980s, falling from a high of $850.00 to $300.00 just five years later, albeit under different circumstances.

However, it was the rebound in prices that restored much of the confidence Bitcoin lost as a store of value.

In a little over two years after the January 2015 trough lows, prices skyrocketed from $170.00 to $1275, shattering its previous high in U.S. dollars. And unlike its first failed attempt at reaching parity with gold, Bitcoin has succeeded in a meaningful way this time. The price of Bitcoin has closed significantly higher than that of an ounce of gold, doing so on several occasions. As of this writing, Bitcoin vs. gold is $1242 versus $1205 gold, respectively. 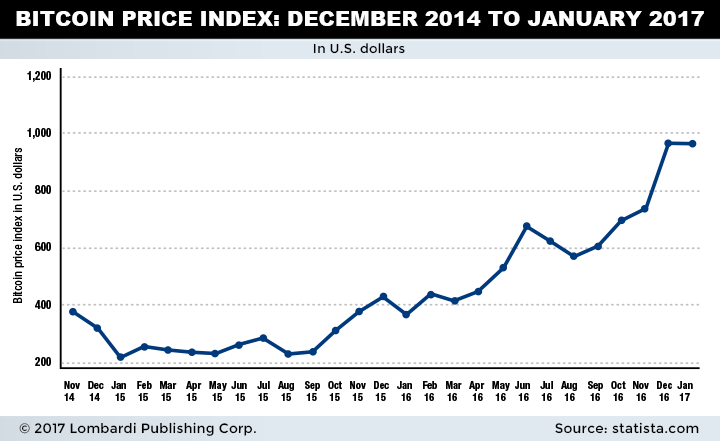 Make no mistake, this carries definite psychological significance. Gold is, after all, the highest priced genuine form of money on the planet, quoted by the ounce. By trading above parity with gold, Bitcoin can now claim sole ownership of this mantle, and all the acclaim that goes along with it. Despite what is effectively an apples to oranges comparison, people tend to view such things in binary terms.

But most significant is the fact Bitcoin that not only recovered, but recovered to forge new highs. Many will cite this example alone as testament to Bitcoin’s true utility and immutability. To many people, Bitcoin now has now proven its resilience when it could have easily wilted. This is the true test of a store of value. Gold has always passed a similar test, be it from central bankers calling it “barbarous relics” to others claiming it has no use in modern economics. Bitcoin can now claim entry into this club.

There’s another important hurdle Bitcoin had to pass to really garner recognition as a store of value: the volatility hurdle. Among the biggest desired qualities in a true store of value is stability over time. After all, it’s impossible to value something where price discovery is too erratic. Investors would shun such a currency regardless.

However, despite Bitcoin’s low float, it has verifiably met this challenge. On April 22, 2016, the 60-day Bitcoin volatility in U.S. dollars dropped below parity with gold, at 1.14%, versus 1.15%. Although it was only for a fleeting moment, the 60-day smoothed Bitcoin price action was less volatile than that of gold. Although only the passage of time can build the track record necessary to truly label Bitcoin as a lower-volatility asset worthy as a holding currency, this milestone was not lost on proponents of Bitcoin. In the discussion of Bitcoin vs. gold, the former became just a little more legitimized.

Bitcoin vs. gold—this doesn’t have to be a mutually exclusive options for investors. There’s nothing that prevents anyone from holding both currencies, and the decision to do so will depend on personal risk tolerances, the bitcoin price forecast 2017, and time horizons. Are investors looking for a bona fide store of value, or something more unproven with perhaps greater potential for price appreciation?

If it’s the former, then gold is the clear choice. Its unparalleled track record as a store of value, universal appeal, and physical characteristics make it the safer asset to own. Gold is the ultimate insurance blanket against currency volatility and devaluation, having preserved the wealth of countless fiat hyper-inflations over the years. The term “King Gold” isn’t frequently used without good reason.

For investors looking for capital appreciation, Bitcoin 2017 may be your best bet. The cryptocurrency has weathered several withering declines only to bounce back stronger every time. User adoption is growing, and volatility is declining over time. As more time passes, investor confidence keeps increasing incrementally. Furthermore, it has all the requisite qualities required to make a sound currency, even if it’s only in digital form.

Many investors with discretionary wealth are currently weighing the pros and cons of Bitcoin vs. gold for their portfolios. Perhaps the answer is both, each for their own reasons and each individually allocated based on individual risk tolerance.