Bitcoin’s rise to prominence has been nothing short of breathtaking. Just when it seems the price can’t possibly move higher, it does. Bitcoin has undergone four separate parabolic runs since 2011, each time soaring to more death-defying heights. Nothing suggests a slowdown in price action at this point. In fact, higher prices seem likely. My Bitcoin price forecast 2018 reflects the increasingly positive catalysts on the horizon, the least of which is soaring institutional demand.

If Bitcoin prices were expected to slow down at some point, that’s yet to happen. The Bitcoin price history in 2017 has actually seen an increase in price momentum—not a decline. Sure, there have been occasional sharp sell-offs, but rallies are more dominant. Prices closed the year 2016 at around $968.00/BTC and, since then, those prices have risen more than fourfold (as of this writing, Bitcoin trades at $4,017.18/BTC). This easily makes Bitcoin the strongest world currency by a factor of thousands of percent. This type of currency strength is something the world has never experienced before.

But can it continue? That’s the million-dollar question on everybody’s minds. Staking a significant position here takes guts, and nobody wants to get caught holding the bag. Fortunately for Bitcoin proponents, intermediate-term momentum seems sustainable. All the momentum is at Bitcoin’s back, and market capitalization projections are favorable.

The latest price momentum boost came following Bitcoin’s August 1, 2017 “Doomsday” hard fork deadline. Not only was this deadline a non-event, it passed a key test with flying colors. The software upgrade was necessary to combat soaring transaction costs and processing times due to Bitcoin’s limited block limit sizes.

In the weeks prior to the fork, investors were fearful that the Bitcoin brand would suffer as an alternative cryptocurrency spin-off would form. There were also fears that possible backdoor security hacks could corrupt the blockchain. Although the hard fork created a separate alt-cryptocurrency called “Bitcoin Cash (BCH),” major problems surrounding the upgrade failed to materialize.

As an added bonus to Bitcoin holders, about $4.0 billion in fresh market value was created out of thin air, courtesy of BCH (each Bitcoin holder received one BCH for every BTC they held). The smoothly-delivered software upgrade also instilled confidence in investors that the more important upgrade, called SegWit2x, would integrate smoothly in the fall. For those old enough to remember the “Y2K” phenomenon, this was it. Same “nothingburger” at the end of it all.

Immediately following Bitcoin’s respite, prices again went parabolic. Between August 1 and August 14, 2017, prices soared from $2,700/BTC to $4,500/BTC (around 67%). It’s almost as if institutional demand finally decided to go all-in, now that the ill-hyped SegWit2x issues had settled. The hard fork non-issue might have been the last significant resistance preventing big institutional money from flowing in. In fact, we have anecdotal evidence of this.

The fact that this announcement was disseminated the day after Bitcoin’s software upgrade may or may not be a coincidence. But regardless, insatiable institutional demand is real. It’s at the point where major derivative exchanges want in. The Chicago Board Options Exchange (CBOE) executes more than 1.27 billion contracts each year (2014 numbers), and Bitcoin promises to receive its healthy share of volume.

It also seems inevitable that an exchange-traded fund (ETF) is around the corner (although a proposal was rejected by the United States Security and Exchange Commission (SEC) earlier this year). Once that’s in place, millions of online traders will be able to purchase Bitcoin derivatives with the click of a mouse.

It’s just a matter of time.

We know that Bitcoin adoption rates are rising quickly throughout the world. We know that an increasing sum of sovereign nations and corporations are accepting it as legal tender. But perhaps the most compelling reason of all the Bitcoin price outlook 2018 is valuation. Now that the market has matured somewhat, more predictable use growth trends are emerging. If trends continue the way many experts expect, Bitcoin is downright cheap from a market capitalization perspective.

For example, Saxo Bank analyst Kay Van-Petersen maintains Bitcoin future value predictions of $100,000/BTC in 10 short years. This is based on forward-looking assumptions based on adjusted growth rates. Van-Petersen projects that all cryptocurrencies will account for 10% of the average daily volumes (ADV) of currency trade in 10 years. Bitcoin will receive the highest individual ADVs, at 3.5%. As foreign exchange ADVs are currently around $5.0 trillion every day, Van-Petersen projects $175.0 billion worth of bitcoin would be traded every day.

In a similar vein, Snap Inc (NYSE:SNAP) co-founder Jeremy Liew and Blockchain CEO Peter Smith extolled a Bitcoin price outlook of $500,000 by 2030! This wasn’t a wild, over-the-top prediction from some no-name outside the industry. This came from successful and respected executives from the tech industry, based on reasonable assumptions. They include:

Even if you believe that these assumptions are overly optimistic, they probably don’t wildly miss the mark. For example, if, by 2030, Bitcoin “only” totals 200 million regular users (which would only be one in 40 people worldwide), Liew and Smith’s price target would miss the mark. But it would still be much higher, perhaps by a factor of four digits. In other words, unless you believe that these analyst projections are erroneous, prices have room to grow. 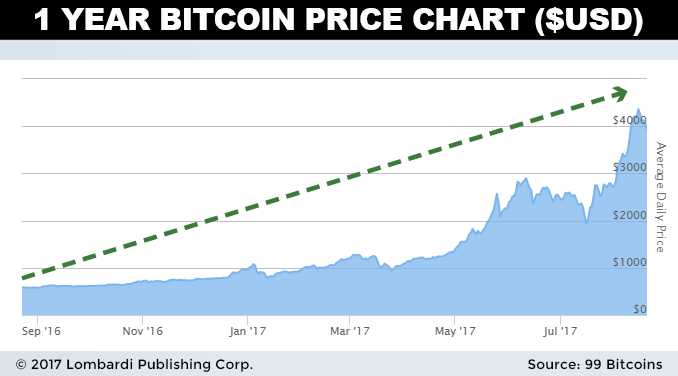 My Bitcoin price prediction 2018 takes the perspective that worldwide user growth will continue at trend levels. Although there are risks involved with this assumption (i.e. major governments resisting Bitcoin integration into the banking system), I believe that the trend is towards liberalization and adoption. In time, cryptocurrencies may even be viewed as a quasi-alternative to the disastrous debts incurred through fiat debt financing. Time will tell.

As such, my Bitcoin price forecast 2018 is $10,200/BTC. Greater government acceptance—such as Japan’s decision to recognize Bitcoin as legal tender—will facilitate this target. Should G20 governments decide to fight Bitcoin adoption, it may fall short. But, as with any brilliant technology, I believe its usefulness is here to stay.

As long as it’s recognized as such, investors will remain quite happy.