After a precarious start to 2017, some investors feared a repeat of the 2013 crash which sent Bitcoin (BTC) prices plummeting over 80% from all-time highs. To us, it seemed like a great buying opportunity. Thus, our Bitcoin price forecast never wavered.

I expect that $2,000 can be achieved this year (more than double the current BTC price), barring any imposition of draconian measures placed on exchanges or trading.

There’s simply too many positive catalysts working in Bitcoin’s favor at the moment, the first of which has been in the news cycles for months: the devaluation of the Chinese yuan.

The yuan has lost about 13.72% against the U.S. dollar (USD) over the past four years in a steady, engineered manner. Unlike other currencies with free-floating exchange rates, the Chinese government regularly intervenes in manipulating the rate to a desired range.

Many investors and institutions have been effectively “signaled” to the general direction of rates (weaker against the USD), and have been using Bitcoin since 2013 as one tool to extract capital from mainland China to invest elsewhere.

As the People’s Bank of China (PBoC) has not signaled an end to its weaker yuan policy, it’s doubtful that a reversal of the yuan’s weakness will happen anytime soon. Call this the Chinese foreign exchange (FX) version of the “Bernanke put,” which was the U.S. Federal Reserve’s pattern of providing ample liquidity which resulted in a buy-the-dip mentality due to an investor perception of put protection on asset prices. The same is taking place with the yuan, except in reverse.

In fact, by all indications, weaker yuan prices could go on for some time.

China already lost its position as the world’s biggest sovereign holder of U.S. Treasuries to Japan. China’s holdings fell $41.3 billion to $1.115 trillion in October 2016, as China continues to sell Treasuries. The sell-off has been prompted by the need to raise funds for defending the yuan, the value of which has been pushed down mainly by capital flight and a strengthening dollar. (Source: “China Sells Off Stock of US Treasury Securities to Protect Yuan,” VOA, December 30, 2016).

The main factors underpinning this continued capital flight and currency devaluation are only set to increase. Weakening global demand for Chinese goods and increasing protectionist rhetoric by a strengthening nationalistic coalition led by U.S. President Donald Trump is not going away. The only question now is by what extent global trade continues to function in its current form.

Will Trump abide by World Trade Organization (WTO) rulings on trade or will he seek bilateral negotiations on Chinese goods, especially after saying he may straight-up ignore some of its rulings? He’s already demonstrated a willingness to diminish the influence of the United Nations (UN) and potentially break free from North Atlantic Treaty Organization (NATO) covenants, so this has the market spooked. (Source: “Trump suggests ignoring World Trade Organization in major policy shift,” The Washington Post, March 1, 2017.)

Why am I focusing so much on the Chinese economy? Simple. As Chinese exchanges account for over 85% of all Bitcoin traffic, continued economic softness will lead people to use Bitcoin as a prime outlet to move yuan offshore into non-depreciating assets. Since the Chinese economy is massively over-leveraged, investors are rightfully worried that yuan devaluation can head much lower before a stabilization point is found. As long as the dual axis of deteriorating fundamentals and weakening yuan prices continues, this will have a supportive effect for the Bitcoin price outlook.

With each passing month, Bitcoin volatility is becoming more currency-like. While volatility is still too high to provide much value as a holding currency, the volatility is dropping over time. Using gold volatility metrics as a benchmark for its similar non-fiat and “alternative” currency qualities, we can see why.

Beyond this milestone, Bitcoin volatility has steadily dropped over time. As we can see in the chart below, each successive peak in volatility is lower than the last, except for a couple exceptions. This is most likely due to the drip in additional Bitcoin supply coming to market, as well as increasing transaction volume, up 340% for its first peak high in late 2013. Despite the tight overall supply of coins—16 million—increasingly velocity of transactions is leading to more liquidity, providing stabilizing effects to price. 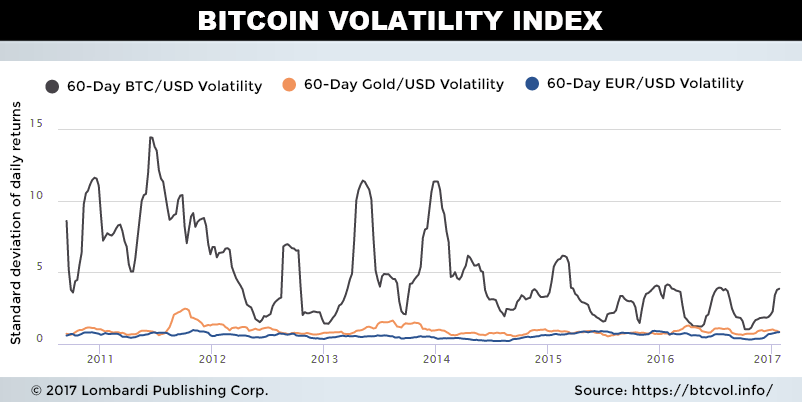 There’s also hope that Bitcoin volatility will quell further once a derivative product or exchange-traded fund (ETF) is introduced on the North American market. As Bitcoin exchanges are not integrated with standard securities platforms, a listed ETF will open up huge investor classes unable or unwilling to purchase Bitcoin directly. At least one initial public offering (IPO) was filed with the U.S. Securities and Exchange Commission (SEC), but the proposal was rejected in March. However, in late April, the SEC announced that it would review the decision. (Source: “Bitcoin marches towards all-time high as SEC gives potential second shot to Winklevoss ETF,” CNBC, April 26, 2017.)

In any event, should the spread between gold and Bitcoin volatility rates continue to depreciate to within acceptable long-term limits, this will expose Bitcoin to a bigger investor pool interested in holding it long-term, rather than just trading it. There’s still a gap to cover, but it’s gradually getting filled.

The Bitcoin price outlook for 2017 also appears outstanding due to the critical mass of acceptance that cryptocurrencies have achieved of late. We’ve now passed the point of questioning whether blockchain technology was of useful relevance in the world of finance.

This isn’t small potatoes; the DTCC is the world’s largest credit derivatives clearinghouse, servicing approximately 98% of all transactions in the global marketplace. The decision will move $11.0 trillion worth of credit derivatives to a custom distributed ledger.

As blockchain systems gain critical mass acceptance, it stands to reason that Bitcoin—cryptocurrency’s undisputed patriarch—will benefit by association. It doesn’t much matter if competing cryptocurrencies employ variations of Bitcoin’s distributed ledger prototype; it’s ultimately a validation of Bitcoin’s core decentralized model. This is aside from the steady growth of broader industry-use cases and applications for Bitcoin itself, and the adoption of Segregated Witness (SegWit) to handle scaling.

Increasing adoption due to faster payment processing, more investment choices and increased blockchain interest will drive interest in Bitcoin forward. At a market capitalization of just under $15.0 billion, the entire Bitcoin market is barely worth more than Twitter Inc (NYSE:TWTR), a money-losing entity whose technology is not assured to last the test of time.

As the worldwide fiat monetary regime moves closer to its endgame, I posit that Bitcoin should benefit from the ensuing chaos. After all, its whole raison d’être was to decouple from monetary systems of centralized governments and its unshackled debasement which inevitably occurs. Thus, it can be argued that Bitcoin’s real value will shine through precisely when traditional fiat money enters its ultimate undoing.

In this regard, Bitcoin is quite similar to gold, in that its limited supply and the inability to counterfeit it make Bitcoin a coveted alternative method of payment. Although Bitcoin does not share legal tender status like that of gold, I expect this could change in the coming years in some countries (although probably not in 2017).

Until then, keep in mind that Bitcoin is especially susceptible to the whims of government interference, so sudden harrowing drops are to be expected.

Another possibility leading to an upward revaluation in prices could be a sovereign banking system or country moving to accept Bitcoin as a partial alternative to the USD. This is not as far-fetched as it seems. As countries seek to diversify away from the USD due to political considerations, Bitcoin could be an attractive asset.

With so many potential catalysts in Bitcoin’s favor, it’s not surprising that many in the know maintain a bullish Bitcoin price prediction in 2017. Among the more optimistic prognosticators, Bitcoin hedge fund manager Daniel Masters predicts that Bitcoin will hit $4,400 by the end of 2017, as adoptions continue to increase and more companies accept it as payment.

SpectroCoin (officially Spectro Finance Ltd.) CEO Vytautas Karalevicius posits that Bitcoin will rise to about $,1800.00–$1,900.00 and transactions will increase 10-fold. This is based on the correlation between Bitcoin turnover and the prices that we’ve generally seen so far.

I’m generally in alignment with this lower prediction, which on a slight overshoot could take Bitcoin prices past gold’s all-time intraday high of $1,923.70.

If technicals are your thing, the short-term price action looks muddled, but the long-term chart looks great. The Bitcoin price is trading both above its 50-day exponential moving average (EMA) of $876.00, and its 200-day EMA of $735.00. This second number is particularly important, as it nearly coincides with the June 2016 high and the 2017 lows.

A closing-day breach of the 200-day EMA would portend poorly for the intermediate long-term trend. Should it stay above its rising 200-day EMA, supported with pivot points, the bullish case remains intact.

Whatever your reasons for owning Bitcoin, this year could yield a decisive “no-doubt” move signal to the world that Bitcoin has “arrived.” There’s simply too much utility for it to be otherwise. Bitcoin and blockchain technology are the future and, in a digital sense, could be considered a superior form of currency.