https://www.lombardiletter.com/bankruptcies-soar-107-a-sign-of-coming-u-s-recession-in-2018/25402/ Bankruptcies Soar 107%: A Sign of Coming U.S. Recession in 2018? Moe Zulfiqar, B.Comm. Lombardi Letter 2018-01-10T10:35:42Z 2018-01-15 09:48:14 recession economic slowdown federal reserve interest rates us economy bankruptcy On the surface, the United States economy seems fine. Unfortunately, if you look at the leading indicators, they suggest that a recession could be coming. Analysis and Predictions,U.S. Economy https://www.lombardiletter.com/wp-content/uploads/2018/01/Bankruptcy-150x150.jpg

Don’t listen too much to the narrative that says the United States economy is marching along just fine. The following is a bold statement, but worth making: The U.S. economy could be edging closer to a recession sooner than many anticipate.

To begin with, look at the number of bankruptcies in the United States.

In 2017, there were 5,744 commercial Chapter 11 bankruptcy filings in the U.S. economy. This was six percent higher than in the previous year. (Source: “Commercial Chapter 11 Filings Increase 6 Percent in Calendar Year 2017; December Chapter 11s Up 107 Percent,” American Bankruptcy Institute, January 5, 2018.)

This is something that shouldn’t be ignored. If we are told on a daily basis that the U.S. economy is witnessing growth, how come so many businesses are filing for Chapter 11 bankruptcy?

The increase of businesses filing Chapter 11 bankruptcies provides a dire outlook for the U.S. economy.

Sadly, bankruptcies aren’t the only thing saying that the United States could be headed toward a recession. Pay attention to American consumers as well. Keep in mind, the U.S. economy is reliant on consumer spending. If consumers struggle, the economy struggles.

As it stands, we see American consumers struggling. Look at the chart below to get some perspective. 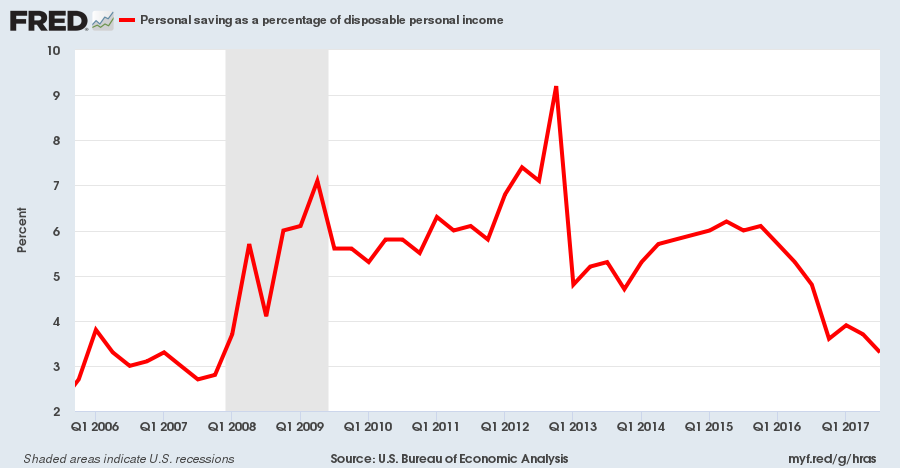 You see, in times of economic growth, this rate usually increases; that could be because people are earning more in those periods.

Over the past few years, however, the American savings rate has plummeted. It was higher than nine percent in late 2012; now it’s 64% below that level.

Here’s one more thing that must be noticed: just before the U.S. economy enters into a recession, savings usually plummet. On the chart above, the gray area represents the recession of 2007–2009. If you look closely, before that recession, the savings rate dropped to the three-percent area.

Could we be seeing that case again? It’s possible.

Dear reader, as I see it, there’s too much complacency among investors, analysts, and economists when it comes to predicting the direction of the U.S. economy. Too much attention is given to past data and very little attention to the leading indicators.

Know this: On top of dismal data, the Federal Reserve is focused on raising interest rates. This is Economics 101; higher rates cool down an economy. So, the U.S. economy could be decelerating much quicker than expected.

If a recession does become the case for the U.S., and economic data starts to show this, don’t be shocked to see investors scrambling. We could see volatility spike suddenly and see losses on assets across the board piling up significantly.