Home » Stock Market Crash » Are We in a Tech Bubble?

The NASDAQ and S&P 500 are trading in record territory as investors continue to be afraid to miss out on strong gains that have come since Donald Trump won the U.S. election. Stock valuations were already in nosebleed territory before the election. The optimism since then has sent stock valuations to even higher—and more unsustainable—levels. But has investor euphoria sent stocks, and in particular the NASDAQ, into a tech bubble? And will the 2017 tech bubble burst or deflate quietly?

If history is any indicator, the current tech bubble will echo the dotcom crash of 2000. It will come out of the blue and it will be severe. It’s not as easy or straightforward to explain the 2000 tech bubble as one might think. What we do know is that the NASDAQ was on a tear in the second half of the 1990s as investors grappled with how to monetize the Internet.

The 2000 tech bubble was born on speculation and died on reality. Like 2017, investors were afraid to miss out on huge daily gains in the late 1990s. And I do mean daily. It’s pretty hard to find someone who didn’t make money on tech stocks in the late 1990s. Tech companies with decent ideas but no real business plan had sky-high stock valuations; and investors didn’t care.

The fear of missing out on the untapped potential of tech companies like Pets.com, eToys.com, and theGlobe.com sent the NASDAQ to an all-time high of 5132.52 on March 10, 2000. Then, with no warning, tech stocks started to sell off, in what Wall Street pundits called “profit-taking.” This resulted in a crash.

Keep in mind, stocks don’t correct—and bubbles don’t form—if stocks are fairly valued. Sadly, the bull market being in its ninth year—and tech stocks being in record territory—is not because companies are reporting consistently strong revenue and earnings growth.

The U.S. economy is in its slowest recovery since World War II, and years of three percent or higher gross domestic product (GDP) growth are a thing of the past.

Stocks have been trading in a tight range over the last couple of months and the Trump bump has stalled, but it’s still keeping stocks at record levels. For stocks to move out of this range, the market needs a catalyst to send stocks higher or for the 2017 tech bubble to burst.

During the intoxicating days of quantitative easing (QE), income-starved investors sent stocks higher, no matter what kind of earnings a company reported. If a firm said it was going to report a quarterly loss of $1.25 per share, but it only lost $1.22 per share, investors rewarded the stock by sending it higher. The same kind of logic is at play in 2017. Stocks are going higher, not because of strong fundamentals, but because there is an absence of negative news.

On one hand, the NASDAQ is in record territory. On the other, investors never do well when tech stocks are this overvalued. Now it’s just a waiting game to see how long it will take for overvalued stocks to correct and for the tech bubble to pop.

We’re in a tech bubble again in 2017, but investors want to know when the tech bubble is going to burst, and whether it be the same as in 2000. The parallels between the 2000 dotcom crash and the 2017 tech bubble aren’t exact, but the similarities are greater than the differences.

Analysts were telling investors that the tech landscape had changed significantly since 2000. In 2000, the Internet was still in its infancy but, by 2011, two billion people were accessing the Internet. High-speed broadband connections were rare in 2000; by 2011, they were everywhere.

Funny, many pointed at tech start-ups like Pets.com and Webvan and said: “of course they went out of business. They might have had great ideas, but zilch when it came to revenue and earnings.”

By 2011, the big tech start-ups had learned from the past! Internet stars like Groupon Inc (NASDAQ:GRPN) and Zynga Inc (NASDAQ:ZNGA) were experiencing phenomenal sales and decent earnings. Investors are a fickle bunch, I guess. No one would point to Groupon or Zynga in 2017 and say they are models of online success today.

In 2011, just before the NASDAQ took off on its current, spectacular run, many pointed out that the 2000 tech bubble was supported by naive investors who sent tech stocks to unsustainable levels. By 2011, investors had become more sophisticated and selective, and were not going to get duped by widespread euphoria. Besides, the NASDAQ was still way below its March 2000 peak, but irrational euphoria was about to kick in.

Fast forward to 2017 and the “it’s different this time around” crowd are making the same claims. An Internet stock like Microsoft is only trading at 20-times earnings, Cisco is at 14-times earnings, while new-kid-on-the-block Facebook is at 25-times earnings. All are undervalued and fairly priced, so no tech bubble. There you have it.

Unfortunately, tech bubbles don’t form because of a few great stocks. The 2017 tech bubble is stretching thin because investors continue to send stocks higher and higher for no good reason. And who wants to miss out on that?

How overvalued are stocks? According to the cyclically adjusted price-earnings (CAPE) ratio—also known as the Case Shiller P/E ratio—the S&P 500 is overvalued by 84%. The ratio, which helped Yale professor Robert Shiller win the Nobel Prize for Economics in 2013, compares current prices to average earnings over the last 10 years. The ratio is currently at 29.49. The long-term average is 16. The CAPE ratio has only been higher twice: in 1929 it was at 30, and in 1999 it was at 45. (Source: “Online Data Robert Shiller,” Yale University, last accessed May 9, 2017.) 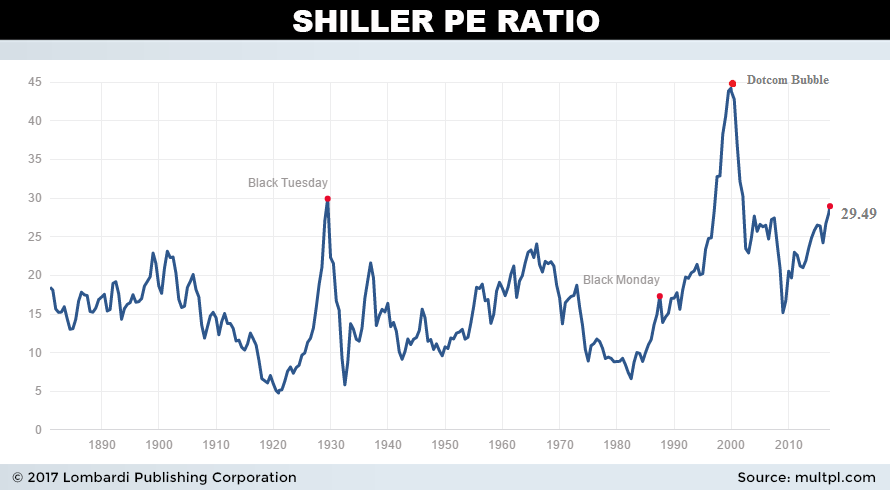 Does this mean the tech bubble is going to pop and the NASDAQ is going to crash in the coming months? Probably not. First, the Case Shiller P/E ratio was at this overvalued level back in the late 1990s, yet it continued to climb higher for two more years.

Second, even though stocks are closing in on the Black Tuesday high of 1929, investors are still holding out hope that Trump’s economic action plan will result in real economic growth and be good for corporate profits. Basically, investors are looking for Trump to justify these kind of valuations.

And they are willing to cut him some slack and take a wait-and-see-approach. But, if Trump’s tax cuts and increased spending don’t result in strong GDP growth gains and a boost in corporate profits, you can expect investors to get nervous and impatient.

Summer corrections are very common, so investors should expect to see the broader markets retrace a little in the coming months. If Trump doesn’t deliver come autumn, the tech bubble could burst, and the S&P 500 could experience a serious correction.

Next Tech Bubble Will Be No Different

In addition to publicly traded tech stocks that are significantly overvalued, there are a huge number of private tech companies with valuations in excess of $1.0 billion. In fact, there are 157 not-so-mythical companies valued at more than $1.0 billion by venture capitalists. (Source: “The Billion Dollar Startup Club,” The Wall Street Journal, February 18, 2015.)

While they’re not all tech companies, they do make up the majority of unicorns. Uber Technologies Inc. has the largest valuation at $68.0 billion, followed by Didi Chuxing ($50.0 billion), and Xiaomi at $46.0 billion.

The causes and effects of a tech bubble follow a similar path. Just like in the run-up to the 2000 dotcom bubble, venture capitalists poured money into tech companies with no proven business strategies. Management burned through the money in an effort to grow their businesses and take them public so they could make more money. Before many tech stocks even hit the public market in the 1990s, they were already significantly overvalued.

The same thing is happening today, and it will help form the next tech bubble.

Venture capitalists are pumping money into tech companies with multi-billion-dollar valuations. These companies, in an effort to outgrow their rivals, are spending like crazy. And, just like in 2000, many of these tech companies will need more money to keep their businesses going…and hopefully take their product or service to market, where naive investors will look to make a quick profit.

As a rising tide lifts all boats, so too will the next tech bubble. Already overvalued tech stocks will ride the next tech bull market higher. Just like many are doing in 2017. Facebook, Amazon.com, Inc. (NASDAQ:AMZN), Netflix, Inc. (NASDAQ:NFLX), and Alphabet Inc (NASDAQ:GOOG) might be great stocks, but they can’t carry the entire tech industry indefinitely. Eventually, all tech stocks need to stand on their own.

The 2000 dotcom crash slammed companies like Amazon, eBay Inc (NASDAQ:EBAY), and Priceline Group Inc (NASDAQ:PCLN) hard; the only reason they survived is that they focused their efforts on making money and, in some cases, had to streamline, diversify, or modify their operations.