Have you ever wondered how engineers have been able to design ever slimmer and lighter smartphones? Even the first non-brick-style flip phones would not have been possible without a little magic. This is not some Harry Potter hocus pocus. The magic comes from special materials using “rare earths,” also known as rare earth elements (REE). Many companies have gotten into REE, and below is a rare earth miner stocks list for anyone seeking the top rare earth miner stocks to watch.

Anyone interested in technology stocks, especially ones related to hardware, like Apple Inc. (NASDAQ:AAPL) or Samsung Electronics Co Ltd (NASDAQ:SSNLF), should care about rare earths. Ideally, those invested in the Qualcomms, Intels and NVIDIAs of the world should also pay close attention to rare earths and rare earth stocks. For a brief period, these minerals received the right attention. It was when Molycorp Corporation (OTCMKTS:MCPIQ) promised to make the United States a top rare earth producer in 2010–2012.

What Are Rare Earths?

Rare earths elements—aka rare metals—are not all that rare. They are 15 often highly magnetic elements that occur in ores that can be found in many parts of North America, Australia, Africa, Asia (China in particular), and Europe. The ores tend to contain thorium and/or uranium. Thus, while finding ores such as monazite and xenotime might not be difficult, finding the ones that can be most easily processed is truly rare. Then there’s also the question of obtaining the elements the market wants.

REE should be at the forefront of commodities investments. Such metals as dysprosium or neodymium, two of the most sought-after rare metals, are fundamental to the production of smartphones. Rare earths are also used in personal compuyters (PCs), electric motors, solar panels, and missile guidance systems.

Production remains concentrated in China, which produces some 90% of demand.

The 15 elements officially known as rare earths also go by the name lanthanides. That’s because the first of the rare earths elements in the periodic table is lanthanum. There are two other metals, scandium and yttrium, which share many characteristics with rare earths. Thus, they are often grouped together. Their main characteristics are high conductivity and magnetic properties.

Rare Earths Are Not Earths and Not Rare, But…

These metals, contrary to what their name suggests, are fairly widespread in the earth’s crust, on an equal footing with certain common metals as a group. Individually, the odds are different. Cerium is abundant, but dysprosium, thulium, and lutetium are respectively scarcer. To classify them better, especially for investment purposes, rare earths fall under the general designations of light (LREE) and heavy (HREE).

Cerium and lanthanum are part of the LREE subset of rare earths. They’re more easily obtained and commonly used to make phosphors for screens, lenses, and some magnets. Neodymium falls into the LREE also, but it’s less frequently found. It makes powerful magnets, including the ones that allow your cell phone to vibrate. HREE’s are the top prize of a rare-earth mining project.

If a prospective REE company wants to make a big stock market debut, it will surely cite the HREE potential of its ores as well as the “ease” with which these can be extracted from the ore.

Rare earths are softer than many other metals. Thus, they are malleable and ductile. That’s important when it comes to allowing for flexible design of small components. These elements are chemically quite reactive, especially at elevated temperatures or when finely divided, but the overwhelming reason for their demand comes from their electromagnetic properties.

Industrial use of rare earths did not start until the Manhattan project (i.e. the first nuclear bomb program) in the 1940s. In the 1970s, yttrium found a common application as phosphors for color TV. Now, rare earths have graduated to the strategic metals category. They have become essential to making electronic components for consumer and military applications, such as radars and guidance systems. 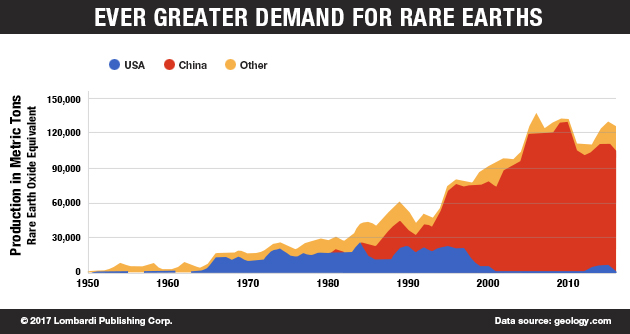 China, which dominated its production, started to tighten exports already in 2009. At first, the pretext was that of protecting the environment. Due to ever increasing demand, accompanied by an exceptionally bullish commodities market, the price of rare earths rose, multiplying by up to 20 times. The peak was reached in 2011. That’s when China halted sales of REEs to Japan for more than two months in retaliation over a territorial dispute involving uninhabited islands (Diaoyu/Senkaku Islands) in the East China Sea.

The fact that China remains the top producer is a major concern. In case of hostilities, China could restrict or even cut off supply. A continued rare earth embargo—or the threat of new ones—would have hurt hundreds of Japanese industrials. The United States and the World Trade Organization (WTO) stepped in to resolve the issue. But the threat to supply remains.

Environmental Concerns Have Slowed Rare Earth Mining Outside of China

The REE mining process is intensive and requires highly toxic processing, which reduces competitiveness. Because of lighter restrictions on mining and—especially—processing, China remains the world’s top supplier of rare earths, but political and security concerns abound. Lockheed Martin Corporation (NYSE:LMT) jets and Raytheon Company (NYSE:RTN) guided missiles need rare earth magnets to operate. Thus, in a way, the United States is at China’s mercy when it comes to crucial materials.

That concern is one of the main driving factors for the future of rare earth stocks. A few years ago, as China-Japan tensions were deepening, U.S. strategic industries seemed almost as if they were hostage to China. That concern, as well as the emergence of clean-tech/renewable energy sources, helped fuel the rare earths stock bubble. It was one of the most dazzling bubbles in the history of raw materials.

Molycorp, which eventually filed for Chapter 11 bankruptcy in 2013, was one of America’s hopes for rare earth independence. But its products were the less-strategic cerium and lanthanum metals. What would have made a difference for Molycorp, allowing it to thrive, would have been the availability of the HREE dense ores. These are the kinds that yield dysprosium, which has huge demand. It is simply irreplaceable in numerous hi-tech applications.

Molycorp’s rise and demise reflects that of the rare earths market. The REE bubble began to slowly burst shortly after the company’s downfall. Some users have developed alternative materials or have recycled them to reduce reliance on Chinese rare earths. Rare earth prices have returned to 2010 levels, which is better than 2013 levels. If, in the short run, the prospects of a recovery are slim, there’s no reason that prices could rise in the long run.

Molycorp suffered from poor administration and over-selling. It spent a considerable sum and became overly indebted. In 2008, Chevron Mining Inc. sold the Mountain Pass mine to Molycorp for some $80.0 million. Molycorp later opened for trading on the New York Stock Exchange (NYSE) at $14.00/share in 2010. It only took a year for Molycorp to hit $79.16/share and a $6.0-billion market cap. It was forced to delist in 2015 as shares went down to $0.20.

The former Molycorp is now Neo Performance Materials. It’s a penny stock, and  it’s one of many REE mining companies.

A report from the U.S. Geological Survey makes it clear that the United States’ reliance on imported rare earth materials remains a security threat. There are other threats, and some projects could reach a fruitful end. (Source: “MINERAL COMMODITY SUMMARIES 2017,” U.S. Geological Survey, last accessed May 16, 2017.)

Any future growth in rare earth mining will likely derive from miners starting production from projects being developed beyond China. Those  projects are mostly in Australia, some in Africa, and a few in Europe. But North America has strong potential with projects in the United States and Canada, especially Quebec. That said, most of the rare earth stocks 2017 trade in Canada and Australia.

Rare earth minerals stock prices have gotten so low that most—if not all of the ones listed above—are considered penny stocks. Nevertheless, those who see the potential of rare earths and other strategic metals do have reason for optimism. This is a sector that could be potentially profitable. Consider the risks and become familiar with which rare earths get the best prices and enjoy the highest demand. Understanding that could make rare earths less of a bet and more of an investment.

One of these companies, Lynas Corporation Limited (ASX:LYC), was emerging as a rival to Molycorp in 2011. After overcoming some Malaysian political and environmental concerns, Lynas fueled optimism that China’s REE dominance could be broken. But, like with Molycorp, Lynas’s ores, extracted in Australia and processed in Malaysia, were too LREE-heavy. Thus, they could not obtain the best prices. The stock peaked at $2.55/share in 2011, but now it’s merely a penny stock.

Still, for the time being, the only way to capitalize on rare earths is through related mining company stocks. As noted in the rare earth miner stocks list above, most of these are traded on the Toronto venture and Australian exchanges. The view to adopt is long-term. In the short term, China’s domination will be difficult to erode.

Yet, Chinese resources are not infinite, and Beijing has started to adopt tougher environmental standards. Eventually, these will force the rare earth miners in Mongolia—where many such resources are located—to reduce production. That will raise prices and make mining projects in Australia, Canada, and elsewhere more profitable.

Investing in rare earths, therefore, must be seen as a long-term game. The risks are related to those of gold or silver mining companies, but they are also greater. Gold and silver processing is less complicated, and grades are easier to assess, but prices fluctuate more.

Rare earths, on the other hand, are industrial metals. Their demand depends mostly on the technology that uses these important materials. Automation, robots, advanced space exploration, self-driving electric vehicles, and hundreds of other technologies need rare earths. So, it’s a matter of time before a more sustained and sustainable rare earth bull market returns. Patient and careful investors, wiling to learn more about the industry, could reap significant rewards.