A Potential 20-Bagger: Bitcoin Price Target Not as Crazy as It First Sounds

Hold on to your hats, Bitcoin fans. Some very influential people suggest the Bitcoin price target could crack $500,000 by 2030, and the forecast isn’t as outrageous as it sounds. This is a tale of a growth story coming into full bloom with the passage of time, gaining worldwide acceptance along the way.

At first blush, the premise of this price prediction seems unbelievable. After all, as of this writing, Bitcoin is “only” trading at around $1,215/BTC (bitcoin), which is only around 0.24% of the $500,000 Bitcoin price target. That’s an awful long way to go, now matter how solid the fundamentals may seem. A price appreciation that high would make the internet bubble seem rational by comparison. What could possibly prompt the price to rise 411-fold in less than a decade and a half?

The Bitcoin price target comes courtesy of Jeremy Liew and Peter Smith, the first investor in Snapchat and the co-founder and CEO of Blockchain, respectively. They made these predictions recently in a presentation, and were they ever ambitious.

Before we dive into those factors, allow me to list the set of assumption these technology elites used for their projections:

Both expect a huge increase in electronic money transfers, which have almost doubled worldwide over the past 15 years. According to The World Bank data, remittance transfers now account for 0.76% of world GDP, or around $600.0 billion. It’s a huge and growing market. Both expect the major catalyst for growth will be greater Bitcoin awareness, along with the growing overall market. 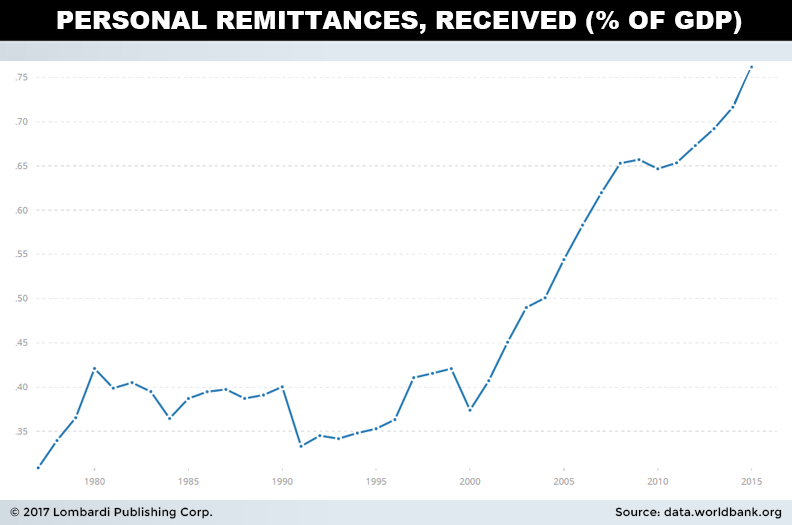 Mobile Penetration. This is the catalyst many CEOs of technology companies expect will drive adoption of their products. Jeremy and Peter expect the same to happen with Bitcoin. As smartphone penetration filters throughout the world, expected to top one billion users by 2020, non-cash transactions on these devices will climb dramatically as a result. Jeremy and Peter suspect Bitcoin could account for 50% of all these transactions, which is quite an ambitious projection. Only great things would result with market dominance on that scale.

A Bitcoin price target of $1,000/BTC was assumed for 2017, which seemed fairly conservative. This is half of Lombardi Letter‘s Bitcoin price forecast 2017 of $2,000/BTC, and more than 20% discount from the current price. I suspect Jeremy and Peter wanted to use a round number in their calculations to simplify things; this would be the rational thing to do. Don’t be surprised if Bitcoin could traded much higher than this number in 2017 however.

Another assumption used was a Bitcoin supply, which is easy to make since the total number of bitcoins that can ever be in circulation is 21 million. That number is expected to be reached after 2040, and will remain in place unless something drastically changes. There’s talk of a “hard fork,” which could potentially split the Bitcoin network into two if the community can’t agree on a protocol, but nothing suggests a rising amount of bitcoins in circulation.

Finally, Jeremy and Peter obtained their ultimate Bitcoin price target by dividing the assumed market cap of $10.0 trillion by 20 million (the amount of fixed supply in circulation). Voila, they come up with a 2030 bitcoin price target of $500,000/BTC and user headcount of 400 million worldwide.

All this comes a couple months after another large bitcoin price target raised eyebrows back in February 2017.

According to President and Chief Behavioral Strategist of Lamoureux & CO, Yves Lamoureux, Bitcoin is on a trajectory that will eventually catapult it into bubble territory. This will ultimately take prices in excess of $25,000/BTC or more. As a macro research firm, Lamoureux & CO is in the business of studying trends. It’s analyzed the market and believes the key ingredients in past bubbles are now present in Bitcoin. Lamoureux argues the mathematics of a finite supply coupled with insatiable demand will carry prices much higher, ultimately culminating in a classic “bubble.” (Source: “Why bitcoin will surge to $25,000,” Yahoo! Finance, February 10, 2017.)

There’s also been a smattering of lower, but substantial price targets by reputable analysts, ranging from $1600 to $10,000 in 2017 alone. The enormous enthusiasm in the market is sky-high currently, and we’ve already seen two bubble moves that initially took the cryptocurrency from pennies to $250.00/BTC, then a second surge extending prices from $230.00 to over $1,250/BTC (beyond parity with gold). All this in the matter of six years. The precedent is there and some are expecting subsequent bubble moves to be the most powerful yet.

It takes a while to wrap your head around this figure, no matter how ardent of a supporter you are. Ten-sigma moves aren’t the type which happen too often. It’s not something investors can “expect,” like it’s some sort of given. Admittedly, much would need to go right for this scenario to play out, but the credibility of the soothsayers is stellar. That goes a long way.

Another thing that goes a long way are elements in Jeremy & Peter’s assumptions, which are playing out right before our eyes. Let’s take the “400 million total users” assumption by 2030 as a prime example.

Japan has just recognized Bitcoin as an official currency. The Japanese Cabinet signed a law recognizing virtual currencies like Bitcoin as money, thus removing a huge potential obstacle to growth. Now citizens can make payments, make transfers, and purchase goods with the full confidence that Bitcoin is recognized as legal tender, and fully legal within the framework of the law. This could provide the springboard needed for a fickle public to finally take Bitcoin seriously as a fiat equal. Such recognition will act to bring Bitcoin out of the fringes and into the mainstream consumer consciousness. (Source: “Bitcoin in Japan: Officially Recognized in April; Asset or Expense?,” Cryptocoins News, March 29, 2017).

The same dynamics are happening in Russia. Deputy Finance Minister Alexey Moiseev is currently working to make Bitcoin and other cryptocurrencies legal sometime in 2018. The impetus for the decision is to fight money laundering by Russia organized crime, and the government has recognized it doesn’t want to steer blind when it comes to knowing about decentralized financial transactions. “The state needs to know who at every moment of time stands on both sides of the financial chain,” said Moiseev, “Just like with bank operations.” (Source: “Russia Caves In on Bitcoin to Open Front on Money Laundering,” Bloomberg, April 10, 2017.)

The fact that two major industrialized nations are moving so fast to recognize Bitcoin is an incredibly bullish development. As we all know, once a couple of influencers jump on board, often the rest follow. This is especially true because of the state’s requirements to understand the counter-parties of each transaction, which they can only do if they bring Bitcoin under a legal tender framework and regulate it. The moment of mass state recognition is upon us, which should then flow to corporate adoption on down to the individual level.

This is how Jeremy and Peter’s “400 million total users” becomes plausible. At that number, there will only be about 1/20 bitcoin for every user in the world, so supply/demand dynamics should force valuation high in “folds.” There’s simply much too little supply to accommodate the dollar value cost of global transaction remittances and the cost of goods. People will need to get used to working with fractions, but they will.

This narrative also fits into the “cashless society” ambitions our governmental overlords seems determined to impose. India’s decision to remove 500- and 1000-rupee notes from the money supply, effectively removing 84% of hard currency from circulation, is evidence of this. Despite the fact many citizens were ill-prepared for such a scenario, Prime Minister Narendra Modi pulled the trigger anyway. This has left hundreds of millions scrambling for an alternative to hard currency, and bitcoin interest has been soaring. Indian start-up Unocoin predicts that the number of Bitcoin users in India will grow by approximately 56% per year for the next decade. (Source: “Demonetization is Leading to Another Catalyst for Bitcoin Demand and Prices,” BTCManager.com, December 2, 2016.)

Don’t for a minute think other world governments aren’t watching this grand experiment with anticipation, readying to implement the same tactics, should it prove successful. Any construct which limits the use of physical bills in an economy will interest governments worldwide.

Will Bitcoin set a new record price in 2017? It already has. The Bitcoin price chart looks fantastic, having fended off several Chinese government attempts to curb demand of exchanges and impose capital controls. Yet, it is still trading near all-time highs and threatening to run again at a moment’s notice. Bitcoin was easily the best-performing currency in 2016, 11-fold higher than its nearest rival, and this may just be a primer.

Out Bitcoin price prediction is $2,000/BTC in 2017, but this may ultimately prove conservative. The purveyors of these latest predictions ought to be taken seriously, as they seem to have credible assumptions and plenty of momentum to back up their claims.