https://www.lombardiletter.com/3-charts-suggest-gold-prices-setting-soar-higher/16149/ These 3 Charts Suggest Gold Prices Setting Up to Soar Higher Michael Lombardi, MBA Lombardi Letter 2017-09-01T12:31:03Z 2018-02-09 05:25:57 All year I have been pushing my readers to look at the opportunity offered by the depressed shares of gold mining companies. It’s still not too late; these shares will soar as gold prices continue their climb. Commodities,Gold https://www.lombardiletter.com/wp-content/uploads/2017/09/iStock-824298246-150x150.jpg

These 3 Charts Suggest Gold Prices Setting Up to Soar Higher

The Future of Gold is Looking Bright

Since late 2016, gold prices have been forming a technical chart pattern called an “ascending triangle.” This pattern is formed when there’s a price uptrend, but resistance to move even higher has been encountered.

Over the last few days, gold prices have moved above that resistance level. In technical analysis terms, this is a “breakout.” You can see it on the chart below.

With every technical chart pattern, there’s usually a price target associated with it. For an ascending triangle, to find the target price, technical analysts usually calculate the widest part of the triangle and add it to the resistance level. This gives them a rough idea of where prices could go next. 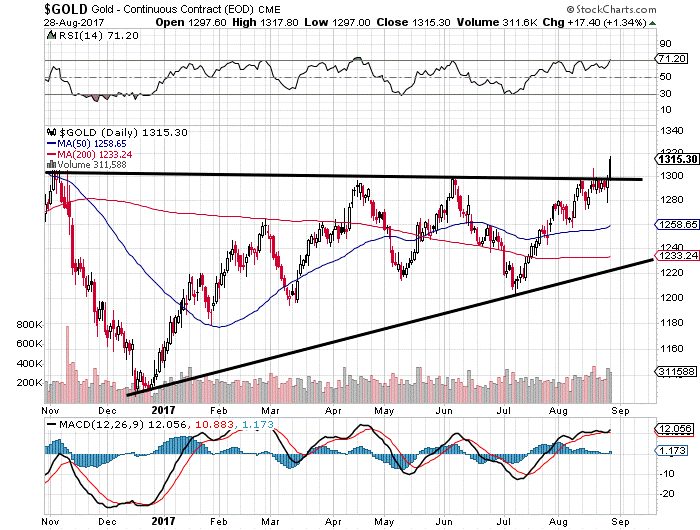 Please also take a look at this next chart below, which is longer-term in scale. The breakout in gold prices is even more defined on this chart.

Another thing that investors should pay attention to on the chart above is the downtrend being broken. Gold prices just broke above a downtrend that was in place since late 2011. This is big and shouldn’t be ignored because, when trends break, usually a massive move follows.

Finally, as for volume, notice how it’s been increasing since 2016? This tells us that buyers are coming in, and that the selling pressure we saw in 2013, 2014, and 2015 may just be diminishing.

Dear reader, looking at what’s happening on the gold price charts, I can’t help but be bullish on the yellow precious metal. The outlook to me is very bullish. All year I have been pushing my readers to look at the opportunity offered by the depressed shares of gold mining companies. It’s still not too late; these shares will soar as gold prices continue their climb.