1. It Could Happen Again

The first fact to know about the stock market crash of 1929 is that a similar crash could happen again in 2017.

2. A Similar Crash Would Have Global Repercussions Today

A similar crash today could cause an economic collapse worldwide. The 1929 crash happened when the world was less interconnected. It affected mostly the United States and Europe. The next one will be more inclusive.

The Great Depression is the name given to the big economic downturn of the 1930s in the heart of Western capitalist economies following the 1929 crisis. Before breaking down this key historical event, a summary of the 1929 stock market crash is necessary.

The 1929 crisis happened so quickly that panic was society’s first response. Some historians have gone as far as describing it as a psychological crisis, even more than an economic one. No doubt, the fact that so few had expected the crash of 1929 showed that American capitalism suffered from the disease of excessive optimism and self-reference.

The latter point, the self-reference, refers to the tendency of many American investors in the 1920s to ignore what was happening in Europe. That failure to read clear signals accounted for the shock. Nevertheless, the stock market crash of 1929 was a process that lasted a week and three disastrous trading sessions that began on October 24, culminating on Tuesday, October 29, 1929.

The 1929 crash was not a single-day event. The crash began on Thursday, October 24, so-called Black Thursday. There was a collapse of the market as stocks lost some 13% of their value. The shock factor was considerable, given that the Dow Jones Industrial Average (DJIA) hit a record high barely a month earlier, on September 3.

Following five years of bullish excess, during which the DJIA increased fivefold and reached a peak of 381.17 on September 3, 1929, the value started to fall. The DJIA started losing its gains during an initial and gradual drop. Stocks entered a yo-yo phase, recovering over half their loss, only to drop again. 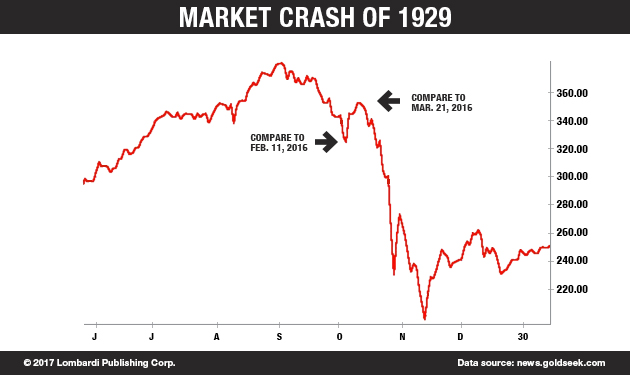 The decline went into a full tailspin on Black Thursday. Some 12.9 million shares were sold that day. The banks were bamboozled. They reacted just like a hurried driver who ignores the water temperature gauge as it moves toward the red end. Instead of stopping to check if a fan belt has broken, she or he drives on, hoping the problem fixes itself.

4. The Banks Expected the Market to Fix Itself

Similarly, the banks were relying on the market to fix itself. Thus, they bought more, achieving a recovery. Black Thursday ended with a 2.1% loss, which seemed positively bullish compared to the 13% loss in the first part of the day. On October 25, 1929, the markets were quiet. It was that deceitful kind of calm that precedes the worst storms.

That storm would cause the “Great Crash” on Monday, October 28, 1929 and complete its path of destruction on Tuesday, October 29, the famous Black Tuesday. On that day, over 16 million shares were sold. The market lost $14.0 billion worth of value. But, during the week that started on Black Thursday, the total loss was $30.0 billion.

Which Factors Led to the Stock Market Crash of 1929?

5. World War I Had a Fundamental Role

As we start to examine what caused the crash of 1929, World War I is one of the main causes. This is not to suggest that the cause of the crash was the war itself, which left devastation and millions dead. Rather, World War I set up the markets for the euphoria of the 1920s, the crash of 1929, and the wake-up call of the Great Depression in the 1930s. 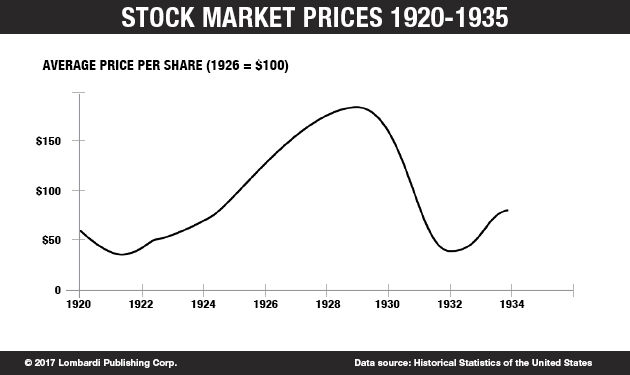 World War I is the most important of the causes of the stock market crash of 1929. The crash occurred as a result of the lopsided development between the U.S. and European economies, and other countries of the world in the decade 1919–1928. Europe was busy reconstructing amid massive social and political changes, marked by instability and the collapse of empires and monarchies.

While World War I had destroyed the European industrial powers, it created a unique opportunity for the United States not only to intervene in the conflict militarily and politically, but—more than anything else—it allowed the U.S. to exploit its huge economic and financial power, already established between the second half of the 19th and early 20th centuries.

As Europe was struggling—while Russia became the Soviet Union, essentially dropping out of the market altogether—growth was stagnant. America was growing rapidly but there was no corresponding expansion of the world market. Thus, the 1920s, the “roaring twenties,” were marked by the dominance of the Republican Party at its peak free market moment.

The government kept public spending at a minimum while favoring the emergence of large corporations and the accumulation of private wealth. There was no social assistance in the sense that we understand it today. It was as free a market as there ever was in the 20th century.

6. The 1920s Were a Period of Great Economic and Social Divide

To get an idea of the spirit of the age and the colossal inequality that existed between the poor and the rich, watch any Charlie Chaplin movie from that period. Movies such as The Kid or Gold Rush depict the socio-economic context that produced the Great Crash. Or read The Great Gatsby by F. Scott Fitzgerald. It was in the 1920s, even more so than in the post-crash years of the Great Depression, that the wage gap widened.

Corporate profits increased but wages stagnated. The rich became richer and the upper-middle classes were blinded by optimism in the markets and the prospect of unlimited wealth. This was fueled by the idea that wealth did not have to come from work. It could be achieved at the New York Stock Exchange (NYSE).

7. There Was Widespread Bullish Sentiment

The ruling market sentiment of the 1920s was nothing short of euphoria. The NYSE set successive records fueled by speculative transactions and the prospect of easy money. The most fashionable financial practice of the age was investing on credit—and buying goods on installments. Euphoria proved costly.

The result was that the real economy became ever more detached from Wall Street and the speculation that ruled it. The Dow Jones rallies of most of the 1920s represented the spread of a wafer-thin economy, increasingly disconnected from the real one.

Stock values rose without any logic, driving up companies’ capitalizations, independently from their industrial or business reality. Simply put, the economy had a weak foundation. Meanwhile, reflecting the financial euphoria, mass production produced too many goods for the American market.

The assembly line and innovations in the system of production led the U.S. economy to grow at a very brisk pace throughout the 1920s. In 1913, just before the start of World War I, Henry Ford invented the assembly line. That was one of the most disruptive economic developments in history. It allowed for unprecedented increases in productivity.

The assembly line meant a sharp reduction in the number of employees in factories. Technological innovations, then as now, forced companies to rationalize. Meanwhile, workers who could, rose to the middle class. The number of service sector, advertising, and marketing jobs emerged, fueling the rise of a new middle class, susceptible to the market euphoria of the age.

U.S. private banks financed the post-war recovery in Europe while, in turn, the old continent, with imports of goods, financed industrial development and the flourishing of the U.S. market. The same went for agricultural production. There was too much of it and not enough markets. Europe, for its part, was too poor to absorb the excess production.

Even almost a century ago, the economies of Europe and the United States were financially interdependent. But, just as in 2007–2008, in 1928 the system started to show the first cracks. In addition to the increasingly unequal distribution of income, inflation increased and the emerging new middle class lost its purchasing power.

That meant all that over-abundance of goods was left occupying space on warehouses and factories, unsold. At the same time, the major investment banks were using up their funds to bankroll European consumption, in hopes of fueling the economy.

The stock market crash in New York and the subsequent Great Depression was the first crisis of the capitalist globalization of goods and capital, which Karl Marx had predicted a few decades earlier. But the crisis offered the United States an opportunity to rethink its model of society. The country was forced to rebuild an economic, political, and financial base that was more inclusive of social rights.

It left the United States in a better position to face future crashes. Indeed, the 2008 financial crash has had deeper effects than the 1929 crash. But the latter’s levels of abject poverty were not repeated.

The effects of the 1929 crash went deep. They should be included as one of the causes of World War II. The effects also helped generate a certain sympathy from prominent European and U.S. intellectuals to Soviet Russia, which remained largely immune from the crisis.

Certainly, the crash and the depression helped bring Adolf Hitler to power. Germany was one of the countries that suffered most from U.S. economic events during the Great Depression. Politically, the 1929 crash had deep effects. After years of Republican dominance under presidents Calvin Coolidge and Herbert Hoover, the Democratic Franklin Delano Roosevelt entered the White House in 1933.

The Republicans lost credibility, unable as they were to lead the U.S., causing a climate of deep uncertainty. The situation remained very serious at least until 1932, when some 75% of Americans were said to be suffering from hunger. The real turning point, in terms of trust and hope was Roosevelt, who ushered a new economic and social policy which was called the New Deal.